Nepal's One And Only International Folk Festival 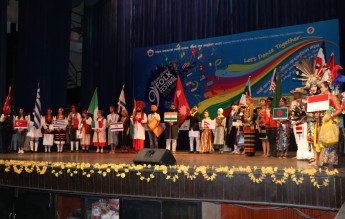 The Festival was initially inaugurated by Hon. Minister at Nepal Cultural Cooperation (Rastriya Nach Ghar) hall in Kathmandu on March 02, 2018. The festival that begun with over 350 international and over 300 national participant artists from 11 different countries from around the globe, then performed at Basantapur Durbar Square, Dhading, Gaidakot (Nawalparasi), Pokhara, different school in Kathmandu and Patan durbar square  attracting more than 5 lacs (half a  million) enthusiastic public audiences. Annapurna Sampurna, Kastamandap Televison and Sagarmatha National Television covered news stories as official Media and other National printing and electronic media broadcasted the event stories with significant emphasis. The International Folk groups from different countries like Bangladesh, Costa Rica, Estonia, Greece, Indonesia, Israel, Italy, Turkey and Nepal actively participated in the Festival and performed their native folk dances and songs along with their respective costumes. The publics in Basatapur, Dhading and Gaidakot have shown great interests and enthusiasm in International Folk parade and artists received great applause. And while other International groups played Resam Phiree Ree and Sim Sime Paneema very famous Nepalese Folk music/songs, with their native musical instruments, all sitting audiences at front stood amass and gave big hand to be in tune. It was a great testimony toward harmonious cultural and friendly ties between the people of Nepal and participant countries.

After successful performances in Basantapur, Dhading, Gaidakot, Patan and Pokhara, International and Nepali Folk groups performed at Kathmandu in capital city Kathmandu on 9th of March 2018 among massive presence of public audiences. Thus, long awaited mega event which is being organized by Everest Nepal Cultural Group in every two years, concluded with the message of global brotherhood, peace and cultural harmony among the nations of the world and being influenced by the warm welcome of the people of Nepal, alluring mountains, tranquility and awesome landscapes, the participants promised to carry message of peace and harmony to their respective countries and committed to tell their relatives as Nepal is a safe destination for travelers.  And furthermore, they assured that they will return to Nepal again to participate in the events of this kind or as a tourist in near future to explore this wonderful Himalayan country Nepal.

And finally, only an organizer to organize Festival of this kind in Himalayan country Nepal, Everest Nepal Cultural group extended its heartfelt thanks to all the participant artists from different countries for their efforts and patience even in adverse circumstances and bringing their Folk cultural heritages among Nepalese audiences with enthusiasm, Travel Partner Festival Travel and Tours, Local organizers, Supporters, Sponsors, Co-Sponsors, Officials, and all members of ENCG & volunteers and audiences for their active support for the grand success of the mega event and expect the same also in the event of this kind in the days to come.